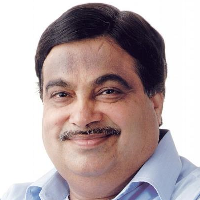 Nitin Jairam Gadkari
Monday, May 27, 1957
email@nitingadkari.org
07122727145
Nagpur East
Shri. Nitin Jayram Gadkari is a Member of Parliament and the current Minister for Road Transport and Highways and Shipping. He won from Nagpur, Maharashtra, India. Gadkari earlier served as the President of the Bharatiya Janata Party (BJP) from 2010-2013. He is also known for the works during his tenure as a Public Works Department Minister in the state of Maharashtra when he constructed a series of roads, highways and flyovers across the state including the Yashwantrao Chavan Mumbai–Pune Expressway.
Nitin Gadkari is current MP from Nagpur East [Nagpur East]. He belongs to Bharatiya Janata Party [ BJP ].

Shri. Nitin Gadkari has served in Government of Maharashtra as the Minister of Public Works Department(PWD) from 1995 to 1999 and restructured it from top to bottom. He has served as the president of the Maharashtra BJP.

Shri. Nitin Gadkari has served in Government of Maharashtra as the Minister of Public Works Department(PWD) from 1995 to 1999 and restructured it from top to bottom. He has served as the president of the Maharashtra BJP.

Mr. Gadkari was born in a middle-class agricultural family in Maharashtra's Nagpur city. Mr. Gadkari’s mother had a great influence on him and she inculcated in him the spirit of social work. He was also inspired in his early life by the RSS and its mission of nation building through selfless motivation to work for the welfare of all sections of the society.

The imposition of emergency by Indira Gandhi in June 1975 was the turning point in his life and he decided to dedicate his life to serve the country rather than practicing law. Mr. Gadkari has studied M.Com, LLB & Diploma in Business Management (DBM).

Mr. Gadkari entered politics as a student leader of the Akhil Bharatiya Vidyarathi Parishad (ABVP) and later joined the Janata Yuva Morcha, youth wing of the BJP. He does not consider himself to be a career politician but takes politics to be social service - initiating projects for the poor, for the society and the downtrodden.

×
To be a Worker / कार्यकर्ता Register Here. If you have all-ready registered plase click on Log In tab & Log-in!